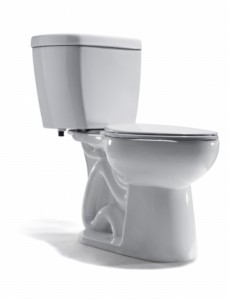 AVPM Corp. is going green and has implemented a water saving program to help you save money! As part of the program, AVPM Corp. has installed the latest Niagra Stealth toilets along with water saving shower heads and aerators for your faucets. For those of you that are curious about the remarkable toilets in your apartment, read the informative article below. Niagara Conservation has introduced a new toilet that’s unlike anything on the market. It uses passive “vacuum-assist” technology to deliver a very quiet, effective flush that consumes just 0.8 gallons (3.0 liters)–making it, I believe, the most water-conserving of any flush toilet on the market.

Who knew there would be so many ways to flush a toilet!

While pressure-assist toilets use compressed air at the top of a sealed tank to push water through the flush valve at a high velocity (achieving a very effective flush), the vacuum-assist Stealth toilet literally pulls the contents of the toilet bowl down the trapway from below.

Here’s how it works: After the toilet is flushed, water fills a special inner chamber that’s hidden inside the conventional-looking toilet tank. (In this respect, it is like a pressure-assist toilet–with its tank-within-a-tank that is filled from the bottom.) As this inner chamber fills, though, air at the top is pushed down through a special transfer tube into the trapway, essentially creating a large air bubble between water in the toilet bowl and water in the sanitary trap near the base of the toilet (see the first diagram). This air bubble, which fills about 12 inches of the trapway, exerts a force on the water in the trapway, raising the water level in the toilet bowl to create a larger water spot (water surface area) than would be expected from a toilet using just 0.8 gallons per flush. When the toilet is flushed, water exiting the inner chamber creates a vacuum–depressurizing the trapway. This depressurization creates a suction force that pulls water from the toilet bowl into the trapway. During the flush, the trapway is entirely filled with water, which cleans the fully glazed trapway.

The vacuum-assist flush mechanism helps the toilet effectively flush a significant quantity of waste using very little water. Using the now-industry-standard Maximum-Performance (MaP) testingprotocol, the Stealth toilet is rated at 600 grams, in both the round-front and elongated-front models. This and other performance features have allowed the toilet to earn the EPA WaterSenselabel for high-efficiency toilets. According to Cecilia Hayward, the marketing manager at Niagara, the toilet also passes all IAPMO requirements for toilets, including a requirement that waste be effectively moved 40 feet along the drainline when the toilet is flushed.

The vacuum-assist mechanism in the (aptly named) Stealth toilet avoids that noise. According to Bill Gauley, P.Eng., principal of Veritec Consulting in Mississauga, Ontario (and the co-developer of the MaP testing protocol for toilets), “it is no louder than any other gravity-flush toilet–and much quieter than a pressure-assist toilet.”

In the U.S. Niagara is the exclusive manufacturer of toilets using this technology, while in Canada the same mechanism is used in Proficiency toilets made by Hennessy & Hinchcliffe (the company that invented the Stealth flush technology as well as Niagara’s Flapperless technology). Hennessy & Hinchliffe and Niagara are business partners and collaborated on incorporating the Stealth technology into marketable toilets.